Home is where the signal ISN’T: 40% of Brits living with mobile phone blackspots

Home is where the signal isn’t: the nationwide poll

Overall, GWS’ consumer survey suggests that 40% of Brits have some kind of mobile blackspot in their home. Almost 1 in 3 respondents (32%) told pollsters they ‘regularly’ have issues making and receiving mobile calls from home; the proportion of respondents that reported regularly experiencing mobile internet connectivity issues while at home was also 30%.

The GWS survey suggests that homes built in the Georgian period are more likely to have mobile blackspots than homes from any other period of ‘modern’ British history (see Figure 1), and that Liverpool and Cardiff are the UK cities with the most home blackspot-afflicted residents (see Figure 2).

Crucially, 1 in 4 of the UK adults polled by GWS for its survey said that mobile data connectivity issues had ‘definitely contributed’ to their decision to switch operators in the past – while more than 1 in 7 respondents said that voice calling blackspots had determined their decision to ditch and switch their mobile service provider.

Figure 1: GWS’ nationwide poll – % of respondents with blackspots by age of house 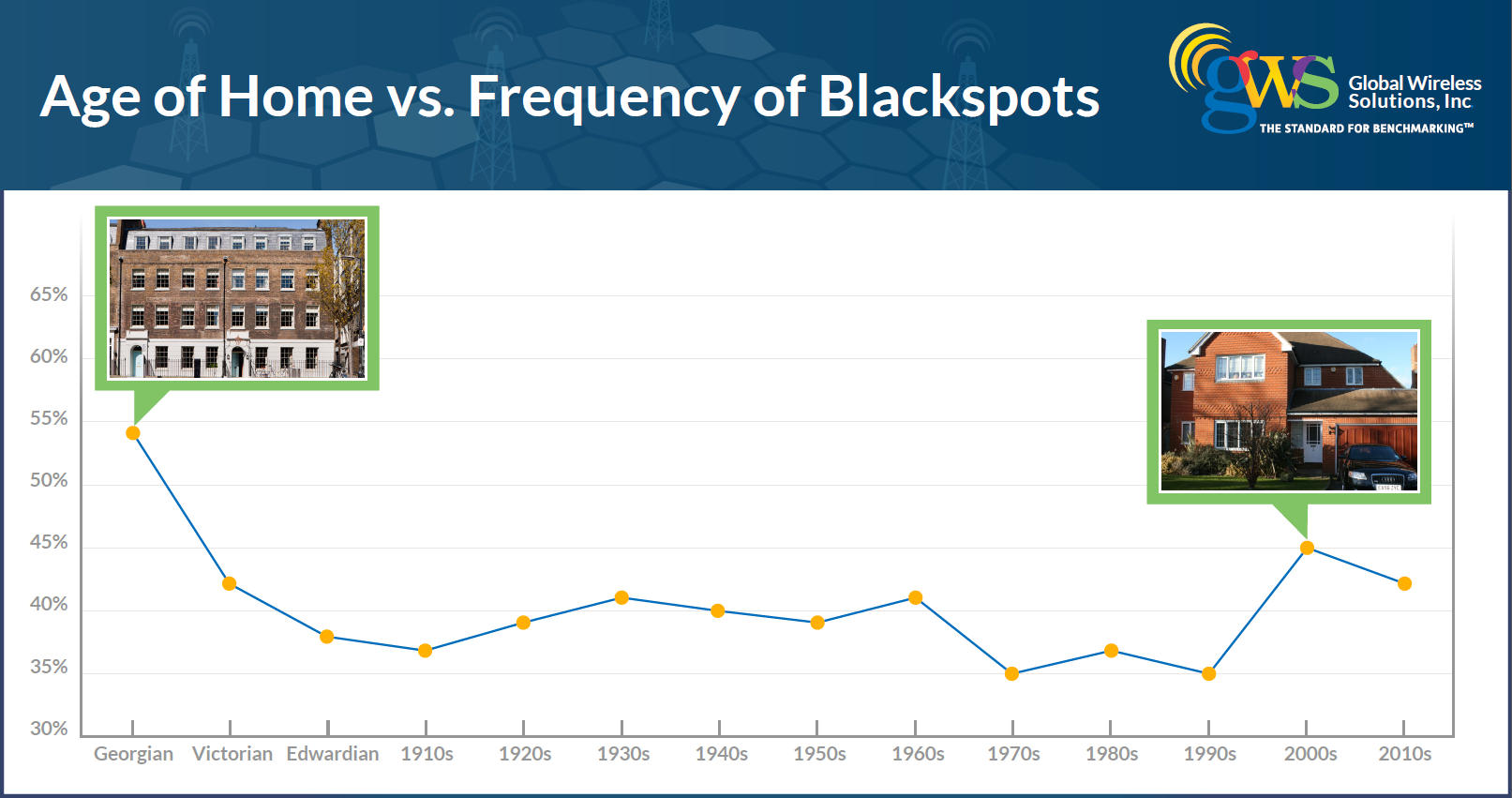 Over a period of 6 weeks, GWS used advanced mobile network testing rigs to gather and analyse data from inside and outside more than 50 houses in London. These rigs allowed GWS to record the ‘layer 3’ network information which most accurately reflects consumers’ mobile experiences – and which is inaccessible to companies relying on ‘crowdsourced’ testing data.

35% of the Londoners GWS surveyed for the consumer poll described above said that they had some kind of mobile blackspot in their home, and when carrying out its own testing in the capital GWS found that moving indoors had a noticeable effect on the reliability of certain UK voice networks.

1 in every 14 test calls GWS made using devices locked to the EE network failed inside houses, and EE and 3’s voice networks were the least reliable of those it tested. EE’s recent attempts to get more of its subscribers to use ‘voice-over-WiFi’ calling suggests that it may already be aware of the reliability issues revealed by GWS’ collection programme.

By way of contrast, O2’s voice network blocked less than 1% of calls during testing, while Vodafone’s blocked and dropped only 1% of calls.

Paul Carter, CEO of GWS, commented: “The UK is no longer a ‘fixed line’ nation. When we’re at home we don’t just receive calls on our mobiles – we make them too. The best phone is the one you’ve got on you – not the one sitting in its dock out in the hallway. But that presents a problem for operators – many of whom are clearly struggling with the brave new world of ‘in-home mobility’. Only by gathering and analysing accurate data on the performance of wireless networks will operators find a solution that genuinely benefits consumers – consumers who are currently not well-served by the kind of ‘crowd-sourced’ data operators too-often use to bolster unrealistic claims about the level of service they offer.”

GWS’ testing programme suggests that all of the big 4 UK operators are having problems extending their 4G/LTE networks into British homes.

EE’s mobile data network delivered the fastest average throughputs during GWS’ in-home testing programme, but the data collected by GWS suggests that the mobile data services provided by O2, Vodafone, and 3 have now also improved to the point where EE’s speed advantage is unlikely to make a difference to subscribers’ actual mobile internet experiences.

If you can’t stand the signal, get out of the kitchen

2 in 3 of the blackspot-afflicted respondents who took part in GWS’ nationwide poll said that they had a mobile calling and/or data problem in their kitchen, and the data GWS collected during its research programme supports the notion that British kitchens are especially likely to ‘play host’ to mobile blackspots.

Average operator voice reliability was at its worst in the kitchen – roughly 95% (with EE’s voice network proving less than 90% reliable). In addition, more calls failed to initialise in the kitchen than in any of the other room ‘types’ GWS tested.

In addition, GWS’ tests also found that the kitchen had both the lowest operator 4G penetration (only 74%, on average) and was the worst room for packet data reliability, suggesting that parents interested in spending some quality time with their kids should insist on holding family meals in their kitchens rather than their living or dining rooms.

Paul Carter, CEO of GWS, added:
“It is to the credit of the UK operators that British consumers are increasingly using mobile data when at home. But success comes at a price and the expectations of those consumers are now more daunting – and harder to meet – than ever before. Our data is clear: in-home mobile data blackspots drive subscribers to ditch and switch their service provider. That’s why operators need to move quickly and decisively to demonstrate the level of service they’re actually providing to Brits – with robust, understandable data that turns their in-home wireless data performance into a selling point, rather than a liability.”

Methodology and notes to editors

GWS’ nationwide poll of 2,000 mobile-phone wielding UK adults was conducted by OnePoll. Fieldwork took place from 24.2.15 to 26.2.15. OnePoll are members of ESOMAR and employ members of the MRS.

GWS tested inside and outside more than 50 homes in London from 8.4.15 to 15.5.15 using an array of 12 Samsung Galaxy S5s (powered by Rohde & Schwarz’s SwissQual QualiPoc Freerider) to gather data for its study of wireless connectivity in British homes. Four types of room were tested inside each house: a kitchen, a living room, a bedroom, and a bathroom.

Three SIMs from each of the four major UK operators (3, EE, O2 and Vodafone) were used during testing – in each case two SIMs were used for voice testing and one SIM was used for mobile data testing. An extremely wide range of voice and data metrics were analysed during the study; a specific rundown of these metrics is available on demand. The figures posted have been weighted and stat-tested.

Global Wireless Solutions, Inc. defines the industry standard for network benchmarking, analysis and testing. Working with some of the world’s largest wireless network providers, GWS offers standardized, high-quality network data and engineering analysis to its customers through a suite of benchmarking products and services, including drive, venue, and in-building testing.

Founded in 1996, GWS is headquartered in Dulles, VA. At last count, GWS has driven more than 9 million data collection miles for its customers. For more information, visit www.gwsolutions.com and follow us on Twitter at @gwsolutionsinc.

This website uses cookies to improve your experience and our site's performance and functionality. Learn more.
ACCEPT