DULLES, Va. — January 2, 2019 — As the wet throngs packed into Times Square to join the New Year’s Eve festivities Monday night, Global Wireless Solutions (GWS) network testing specialists were on the ground and in the action to see how well the mobile networks responded to the millions of social uploads and calls made around midnight to ring in the new year.

The verdict: “Networks were working hard to handle all the traffic, kind of like getting through the Holland Tunnel at rush hour,” said Dr. Paul Carter, CEO and founder of Global Wireless Solutions. “Even though providers took extra steps, people most likely experienced some delay in connecting with friends and family when the clock struck midnight.”

This report marks the debut of the GWS “Event-o-Meter,” a measure of network performance at historic and national events and a barometer for how American consumers experience wireless connectivity when networks are trying to accommodate heavy traffic. GWS Event-o-Meter is based on the company’s OneScore evaluation process, a measurement of overall performance that takes into account voice, data, video, coverage and reliability metrics as well as customer experience.

Delivering on consumer expectations for mobile communications is what drives the wireless industry. “The challenge for operators is to provide sufficient network capacity to meet increasing data demand, regardless of the venue or user activity,” said Bill Ho, principal analyst at 556 Ventures. “GWS’ technically rigorous testing methodology enables them to evaluate network performance at any location or event as it relates to how real consumers use their network.”

By way of comparison, the 2018 Mobile World Congress in Los Angeles had a OneScore of 89, Donald Trump’s 2017 presidential inauguration ranked at 75 and the 2018 Boston Marathon scored 86.

GWS testing specialists experienced the following before, during and after the ball dropped:

“We took our new GWS Event-o-Meter to the streets in Times Square this New Year’s Eve to see how the network stacks up in this ‘acid test’ for performance,” added Dr. Carter. “Americans count on wireless performance when and where they need it, and New Year’s Eve is no exception. We must be able to post photos, download videos and place phone calls. Overall, the networks made a good effort to accomodate the incredibly high traffic at one of the busiest times and spots in the country.” 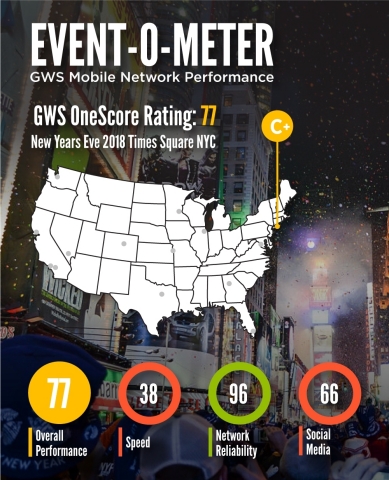 GWS had a total of three data collection teams in New York City on New Year’s Eve. Each team used SwissQual QualiPoc on Samsung Galaxy S9 collection devices to measure the performance of the Tier 1 mobile networks. Nearly 13,000 voice and data samples were collected and compiled into a single OneScore, resulting in a combined overall event experience measurement on a scale from 0-100. New Year’s Eve data collection started at Monday, December 31, 2018 at 5:00 p.m. ET and concluded on Tuesday, January 1, 2019 at 2 a.m.