DULLES, Va. — March 5, 2019 — With crowds estimated at around 1.4 million, the city of New Orleans has been filled with throngs of people this year celebrating Mardi Gras, and Global Wireless Solutions (GWS) network testing specialists were in the midst of it all to see how well – or in this case, how poorly – the mobile networks responded to the overwhelming demand at one of the biggest multi-day parties in the country.

According to the GWS Event-O-Meter, Mardi Gras 2019 received a OneScore of 66 out of 100, earning the event a “D” in the classroom of mobile network performance. That OneScore is notably lower than Donald Trump’s 2017 presidential inauguration (75), the 2018 New Year’s Eve celebration in New York’s Times Square (77), and the 2018 Boston Marathon (86).

The Mardi Gras 2019 findings of the GWS Event-o-Meter provide a true measure of network performance at popular events nationwide and a barometer for how American consumers experience network performance at times of heavy traffic. The GWS Event-o-Meter is based on the company’s OneScore evaluation process, a measurement of overall performance that takes into account voice, data, video, coverage, and reliability metrics, as well as customer experience.

In today’s mobile society, reliable cellular networks are a given – a requirement for daily life. So, what happens when you attend a major event like Mardi Gras and you want to post one of the coolest videos you’ve ever taken?  According to GWS testing and testimony on the streets of New Orleans, waiting the 30 seconds to post your video puts a damper on revelry.

“Four straight days of poor performance must have been frustrating for those attending this large and very popular event. The networks were simply overwhelmed by the sheer numbers of people trying to connect,” said Dr. Paul Carter, CEO and founder of Global Wireless Solutions. “We did notice that the operators added more advanced features since we last tested in New Orleans six months ago. For example, multiple carrier aggregation has increased substantially, doubling the capacity. But it simply wasn’t enough.”

GWS performed testing from March 2 through Fat Tuesday, March 5, 2019, at Mardi Gras events including parades, festivals, and celebrations in the French Quarter and across the city. The official OneScore for Mardi Gras in New Orleans was 66 out of 100, a near-failing grade for overall network performance.

The lackluster performance was validated by people on the streets of New Orleans. “We expected there to be poor performance during Mardi Gras but not as bad as we experienced this year,” said one Mardi Gras participant. This sentiment was shared across the city.

Despite reports of poor performance, network carriers offered advanced features to improve performance, including LTE 4CA (carrier aggregation of four channels for the fastest 4G available), higher-order modulation like 256QAM, voice over LTE (VoLTE) calls, and increased use of LTE multiplexing techniques (multiple-input and multiple-output) like 2×2 and 4×4 MIMO.

“Americans count on wireless performance when and where they need it, especially at major celebrations like Mardi Gras,” added Dr. Carter. “Consumers want to share their experiences by posting photos, uploading videos and calling friends and family. Overall, the networks failed to accommodate the incredibly high traffic at one of the craziest times and busiest places in the country.” 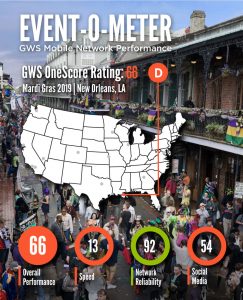 GWS had two data collection teams in New Orleans for Mardi Gras. Each team used SwissQual QualiPoc on Samsung Galaxy S9 collection devices to measure the performance of the Tier 1 mobile networks. Nearly 11,000 voice and data samples were collected and compiled into a single OneScore, resulting in a combined overall event experience measurement on a scale from 0-100. Consumer feedback was collected on site during the festivities. Mardi Gras data collection started on Saturday, March 2, 2019, at 4 p.m. CT and concluded on Tuesday, March 5, 2019, at 1 a.m. CT.

Next Post
GWS Report: In Terms of Mobile Connectivity, the National League ‘Hit It out of the Park’ on MLB Opening Day