GWS Report: In Terms of Mobile Connectivity, the National League ‘Hit It out of the Park’ on MLB Opening Day

Global Wireless Solutions Event-o-Meter Pit National vs. American League Stadiums Against Each Other in a Mobile Network Performance Challenge on Opening Day 2019

DULLES, Va. — March 28, 2019 — All 30 Major League Baseball (MLB) teams played today for Opening Day 2019, and Global Wireless Solutions (GWS) network testing specialists were on the ground at Nationals Park in Washington, D.C., where the Mets played the Nationals, and at Yankee Stadium in New York City, where the Orioles played the Yankees, to see how well the mobile networks responded to the hundreds of thousands of social uploads and calls made during the games.

The National League OneScore at Nationals Park also broke the record with the highest GWS Event-o-Meter score of all events tested by GWS thus far. By comparison, the OneScore for the Boston Marathon 2018 was 86; New Year’s Eve 2018 in Times Square was 77; Donald Trump’s 2017 presidential inauguration scored 75; and New Orleans Mardi Gras 2019 scored 66.

“The networks really hit it out of the park, especially at Nationals Park,” said Dr. Paul Carter, CEO and founder of Global Wireless Solutions. “Providers took extra steps to deliver to baseball fans the wireless connectivity they needed to document the day. It’s clear that very few experienced delays connecting with friends or uploading social posts.”

This report marks the third GWS Event-o-Meter for 2019, a measure of network performance at popular events nationwide and a barometer for how American consumers experience wireless connectivity when networks are trying to accommodate heavy traffic. The GWS Event-o-Meter is based on the company’s OneScore evaluation process, a measurement of overall performance that takes into account voice, data, video, coverage, and reliability metrics based on customer experience.

Network carriers deployed advanced features to improve performance including carrier aggregation, higher-order modulation like 256QAM, voice over LTE (VoLTE) calls, as well as increased use of LTE multiplexing techniques (i.e., multiple-input and multiple-output) like 2×2 and 4×4 MIMO. This was particularly evident at Nationals Park where AT&T and Verizon’s use of advanced features resulted in their ability to achieve throughputs far greater than the other operators (23% and higher) during GWS’ network stress tests. 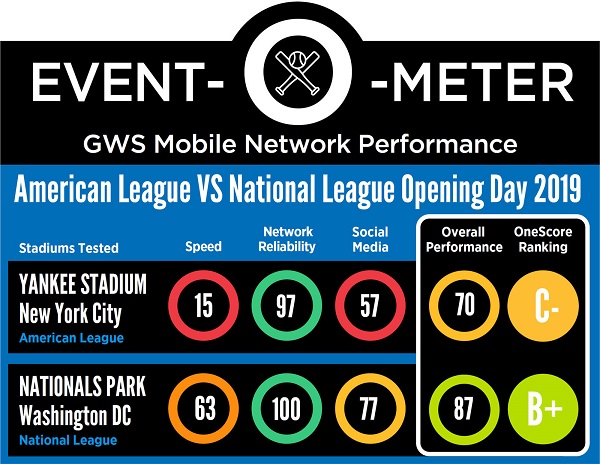 GWS had a total of two data collection teams at Yankee Stadium in New York City and at Nationals Park in Washington, D.C., on March 28. Each team used SwissQual QualiPoc on Samsung Galaxy S9 collection devices to measure the performance of the Tier 1 mobile networks. Nearly 2,200 voice and data samples were collected and compiled into a single OneScore, resulting in a combined overall event experience measurement on a scale from 0-100.