Previous Post
GWS Report: In Terms of Mobile Connectivity, the National League ‘Hit It out of the Park’ on MLB Opening Day
Read on Mobile Enter Reading Mode

Mobile Networks Finish the Boston Marathon with a Reasonable Performance

Dulles, VA, April 16, 2019 – Weathering a mixture of sun, wind, rain, and large crowds along the 2019 Boston Marathon race route, Global Wireless Solutions (GWS) completed their own marathon of mobile network performance testing during the prestigious race.  Of particular interest was measuring how well the mobile networks managed the surge in connectivity and social media traffic from the half million spectators that were expected to attend this popular event.

Overall, the mobile networks finished the race with a OneScore of 76 – a C in terms of network performance. An average performance, although not as high as last year’s Boston Marathon score of 86.  GWS Event-O-Meter also recently recorded OneScores of 87 and 70 at MLB’s Opening Day at Nationals Park and Yankee Stadium respectively, 66 for last month’s Mardi Gras in New Orleans, and 77 for New Year’s Eve in Times Square.

“The networks were able to hold their own during the marathon even with thousands and thousands of fans actively engaged in social media throughout the race,” said Dr. Paul Carter, CEO and founder of Global Wireless Solutions, Inc. (GWS).  “It’s clear that the network operators are strongly competing in their own head-to-head race to 5G deployment; we can see the improvements and additions in advanced features in Boston over last year’s marathon – edging the networks closer and closer to the 5G finish line.”

This report marks the fourth GWS Event-O-Meter for 2019, a measure of network performance at popular events nationwide and a barometer for how American consumers experience wireless connectivity when networks are trying to accommodate heavy traffic. The GWS Event-o-Meter is based on the company’s OneScore evaluation process, a measurement of overall performance that takes into account voice, data, video, coverage, and reliability metrics based on customer experience.

GWS performed testing along the marathon route including each mile marker and the area around the finish line as well as the Boston Marathon’s Fan Fest.  The mobile networks scored a 76 out of 100 for overall performance at this popular event.

GWS testing also revealed that all network operators deployed advanced features such as two, three, and four channel carrier aggregation as well as 256QAM (a higher order advanced modulation technique).  In addition, GWS saw a high rate of voice over LTE (VoLTE) calling and significant usage of LTE multiplexing techniques (i.e., 2×2 and 4×4 multiple-input and multiple-output) particularly with 2×2 MIMO. In fact, on average, carrier aggregation was used over 80% of the time by operators during GWS network stress tests; similarly 2×2 MIMO was used two thirds of the time by operators.  The net result was that these improvements enabled operators to reach reasonably high throughputs during the network stress tests; for example,  AT&T and T-Mobile throughputs both averaged 51 Mbps while Verizon averaged 35 Mbps and Sprint 34 Mbps (for Sprint this represented a 46% increase in speed and AT&T 33% over last year). 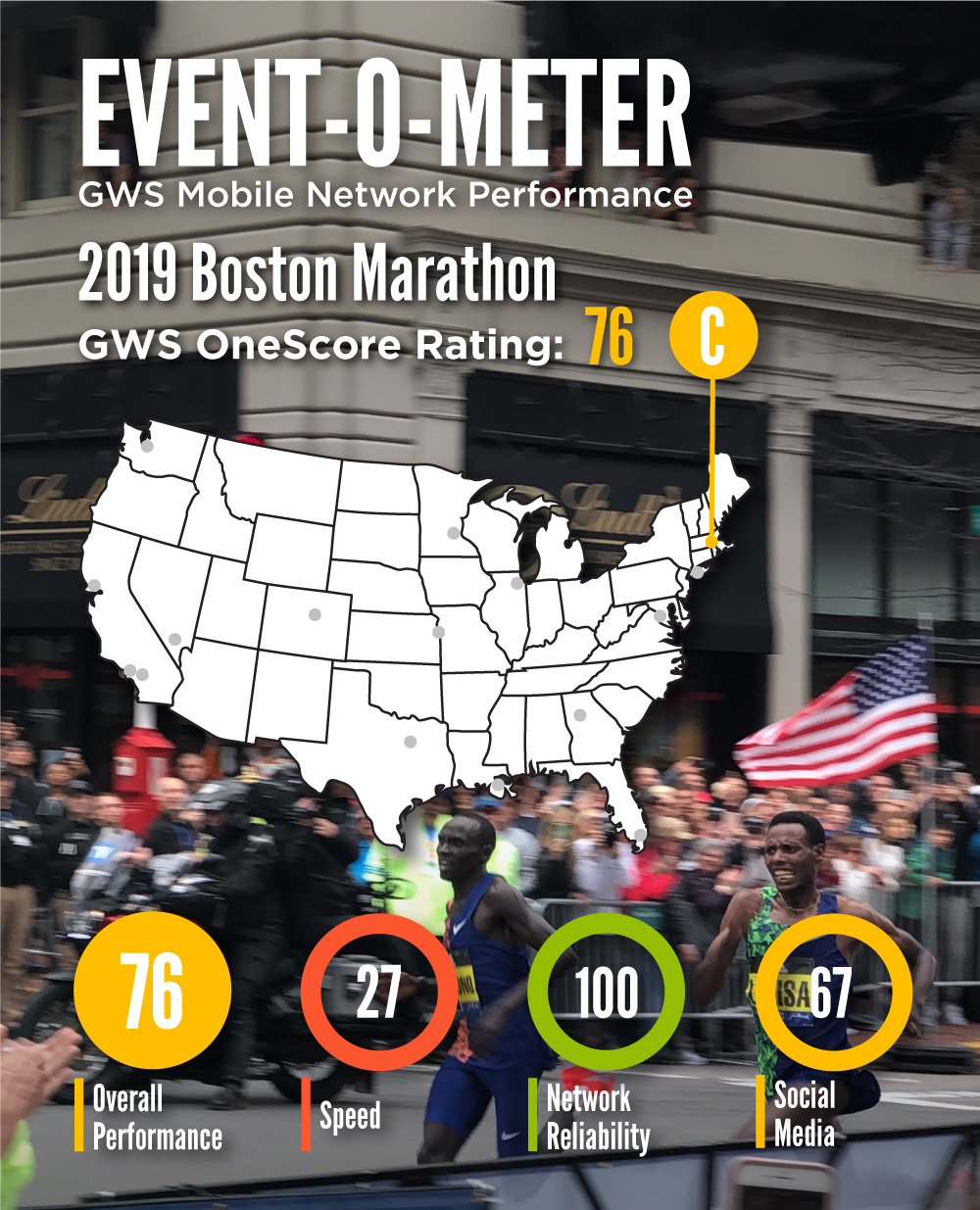 GWS network testing specialists collected along the entire Boston Marathon route and conducted testing at each mile marker as well as the finish line area, and also at the Boston Marathon Fan Fest at Copley Square.  SwissQual QualiPoc on Samsung Galaxy S9 collection devices were used to measure the performance of the Tier 1 mobile networks. Just over 13,000 voice and data samples were collected and compiled into a single OneScore, resulting in a combined overall event experience measurement on a scale from 0-100.