Dulles, VA, June 18, 2019 – Global Wireless Solutions (GWS) evaluated mobile network performance in Chicago’s Grant Park while walking amongst thousands of Pokémon GO players (“trainers”). Using their smartphones and tablets, trainers moved around Grant Park while actively engaged in the app’s social gameplay activities including online interactions with each other. During this popular four day event, GWS network testing specialists measured how well the mobile networks managed the surge in connectivity and social media traffic while thousands of trainers were online in the park in search of Pokémon (an estimated 60,000 participants attended along with curious spectators).

In terms of overall performance during the Pokémon GO Fest, mobile networks posted a OneScore of 72 out of 100 – the equivalent of an C-; an average score particularly when compared to other large events tested so far this year.  Earlier this year, GWS Event-O-Meter recorded OneScores of 38 at the Coachella Valley Music and Arts Festival, 76 at the Boston Marathon, 87 and 70 at MLB’s Opening Day in Nationals Park and Yankee Stadium respectively, 66 during Mardi Gras in New Orleans, and 77 for New Year’s Eve in Times Square.

“Thousands of Pokémon GO Fest participants gathered together over four days at Grant Park, diligently playing and constantly connected regardless of whether it was sunny, rainy or chilly – that’s an impressive outing with large demands on the mobile networks.  Fortunately the networks held up and provided participants what they needed the most – reliability.” said Dr. Paul Carter, CEO and founder of Global Wireless Solutions, Inc. (GWS).  “With the networks achieving data task success rates of nearly 100%, participants were able to play unimpeded and spectators were able to post to their favorite social media sites without problems; the net result was four days of fun and entertainment, and an event that was well done with a solid performance by the network operators.”

This report marks the sixth GWS Event-o-Meter for 2019, a measure of network performance at popular events nationwide and a barometer for how American consumers experience wireless connectivity when networks are trying to accommodate heavy traffic. The GWS Event-o-Meter is based on the company’s OneScore evaluation process, a measurement of overall performance that takes into account voice, data, video, coverage, and reliability metrics based on customer experience.

GWS performed four days of testing throughout Grant Park where Pokémon GO Fest was held including all areas where participants played (i.e., areas where trainers captured, traded, trained and battled Pokémon). This included the Buckingham Fountain, Spooky Woods, Winter Forest, Fairy Garden, Sandy Desert, Team Lounges, and Battle Arena.  The mobile networks scored a 72 out of 100 for overall performance at this popular event.

All network operators deployed some level of advanced features such as two, three, and four channel carrier aggregation as well as 256QAM (a higher order advanced modulation technique). In some instances, AT&T and Verizon had five channel carrier aggregation active as well as LAA (license assisted access). In addition, GWS observed that voice over LTE (VoLTE) was nearly 100% available (99.6% and above) on all networks.

These features are becoming more commonplace in networks across the U.S. as GWS also saw active usage of LTE multiplexing techniques (i.e., 2×2 and 4×4 multiple-input and multiple-output) particularly with 2×2 MIMO. For example, networks used 2×2 MIMO at least one third of the time during testing; in fact, 2×2 MIMO usage on Sprint’s network was observed 88% of the time during testing. 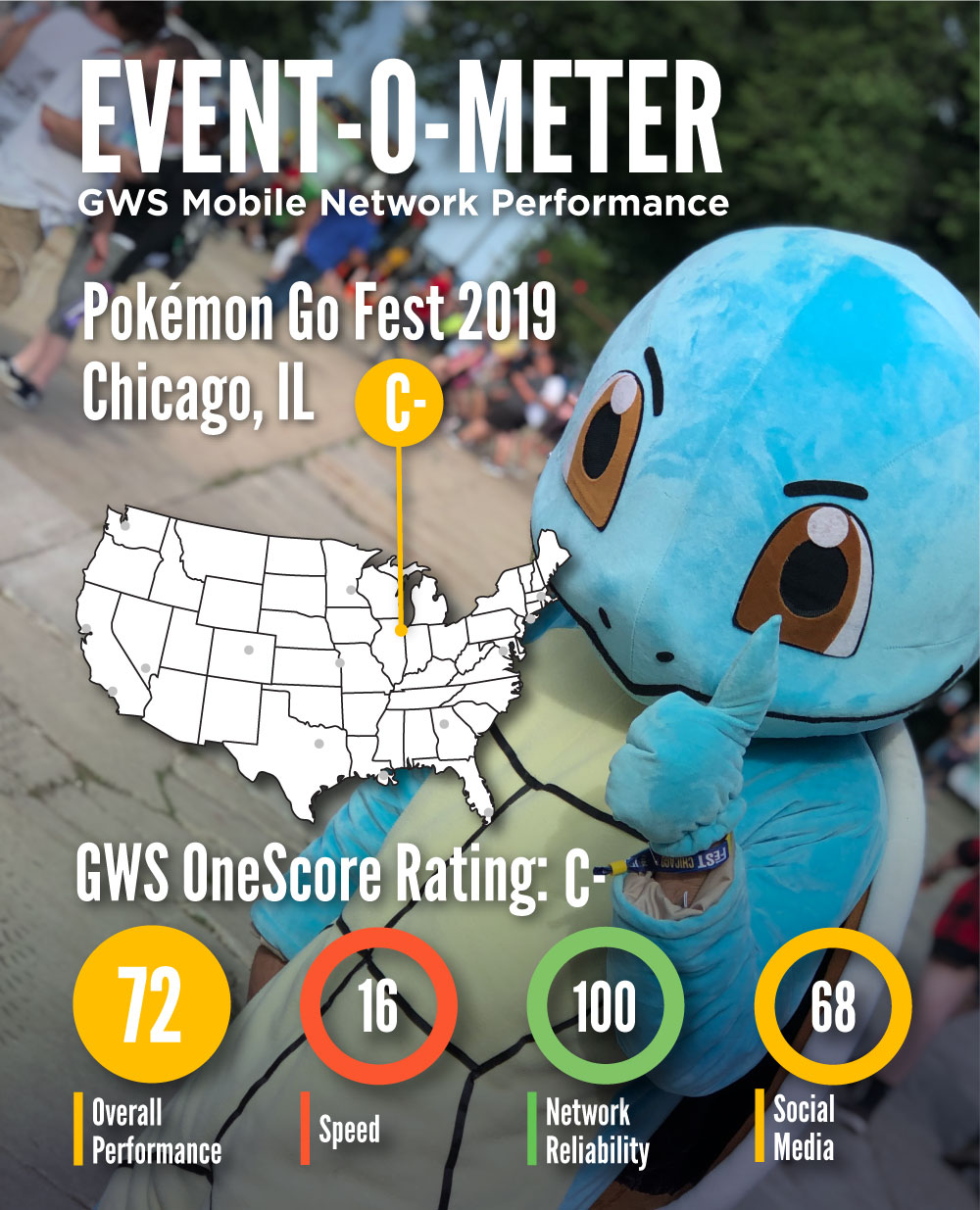