Social dining continues to be a massive online trend, with hashtags like #foodie and #foodporn amassing hundreds of millions of posts on Instagram alone. A new consumer survey from GWS, polling over 2,000 UK adults discovered that nearly a third (29%) admit to taking pictures of their food when dining out, while a fifth (21%) say that they use their phones to take photos of restaurant interiors while they dine.

But connecting to the internet to upload and view photos via social media while in the restaurant can be a challenge. More than a quarter (26%) now say that they browse the internet while at the dinner table – with 23% specifically indicating social feeds, such as Instagram and Facebook, as part of their browsing habits – and yet the same percentage (26%) have experienced the frustration of slow browser speeds while trying to connect. In fact, many diners are unable to use their phone at all; over a fifth (23%) say that they have been forced to go outside of a restaurant to use their phone because of a lack of reliable mobile coverage. Even worse, one in ten (11%) said that their experience in a restaurant had been ruined due to poor mobile connectivity.

To dig further into these findings, GWS’ team of engineers spent a month conducting scientifically controlled tests evaluating mobile network performance inside and outside 50 of the most popular, Instagrammable restaurants in the country’s ‘gastro capital’. While London is often celebrated for its culinary scene and restaurant experiences, GWS’ extensive network testing collection of just over 47,000 voice and data samples also indicates that there are ‘not-spots’ for connectivity, particularly in tourist hotspots. The results were ranked using GWS’ OneScore evaluation process, a measurement of overall performance that takes into account voice, data, video, coverage, and reliability metrics based on customer experience.

GWS OneScore rankings revealed that Chojo, Berners Tavern, Bourne & Hollingsworth Buildings, Knife Restaurant and Riding House Café score top, whereas many of the restaurants in the Soho and W1 area fall short, landing more towards the bottom end of the table (click here to see map of restaurants tested and ranked from best to worst mobile performance).  This is sometimes due to the restaurant being underground; testing at Brasserie Zedel, for example, experienced many failed calls and data tasks across the wireless operators, as this restaurant was deep underground.

Similarly, other poorly performing London restaurants include picturesque high-rise locations such as the Duck and Waffle on the 40th floor of Heron Tower, and Darwin Brasserie at the Sky Garden located on the 36th floor. Unsurprisingly, network operators are challenged in providing wireless service high above the typical rooftop levels and below ground. 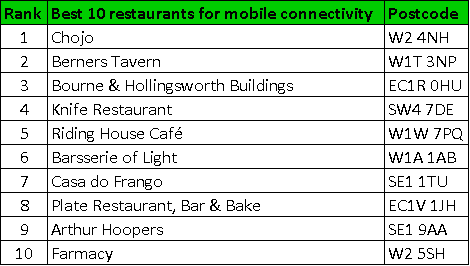 Whetting the appetite for WiFi

According to the research, 18% of Brits expect all restaurants to offer free WiFi as standard. While GWS found that the overall speeds of the network were similar across mobile and WiFi, several of the restaurants tested did not provide any working WiFi at all. This was highlighted by GWS’ consumer survey that discovered many people feel they cannot rely on WiFi coverage when dining out – indeed, only 11% of Brits surveyed look for WiFi when they dine out. This could be as a result of poor experiences with WiFi reliability in restaurant locations, as just under a quarter (24%) said they had previously been unable to connect to a restaurant’s WiFi.

‘Service with a smile’ – When looking at how the different operators fared in the London test, GWS’ test data showed that O2 and EE had the highest rate of successful call attempts (99%) across all restaurants assessed. O2 also had the top data task success rate (99%), meaning that those on O2 are more likely to be able to upload and download files successfully when in the restaurants tested.

‘Hurry up and load, my dinner’s getting cold’ – For diners who like to consume content along with their meal, EE had the highest number of first place finishes out of the top ten restaurants in terms of download speeds. Of the top ten restaurants with fastest throughputs, EE was quickest in five of those locations, followed by O2 (three) and Vodafone (two). O2’s customers might have more cause to celebrate, however, as their three wins were also the three fastest throughputs of the test – with O2 download throughputs ranging from 53 to 82 Mbps at Salt Yard, Granary Square and German Gymnasium.

‘Satisfying the social appetite’ – For those looking to upload restaurant selfies and photos of their meal to social media, Vodafone and O2 both served up success. The two networks claimed the joint-highest number of top ten finishes when it came to restaurants with quickest upload speeds for larger file tasks (four each), followed by Three (two). For a quick restaurant check-in or social media status update between courses however, O2 scored highest – with eight of the top ten first place finishes at restaurants with fastest uploads for small data tasks, followed by Vodafone in second place (two).

Dr Paul Carter, CEO of GWS: “Our phones are with us all the time as people expect to stay connected, stay in touch and post content wherever they are – especially in new, interesting or trendy places. What’s surprising though is that even in areas such as London we are still seeing weak mobile network service in popular, central locations when indoors – including many restaurants that may be designed or promoted with Instagram or social media in mind. These visually engaging spaces and menus are created to inspire the maximum number of posts from guests which, in turn, helps drive footfall. Our survey shows that people actively use their phone when dining out, so if the network is slow and unreliable, and WiFi is intermittent (or not working at all) then that doesn’t bode well for the hipster chic restaurants trying to make a name for themselves – or, for that matter, any restaurant that wants a thriving repeat business”. 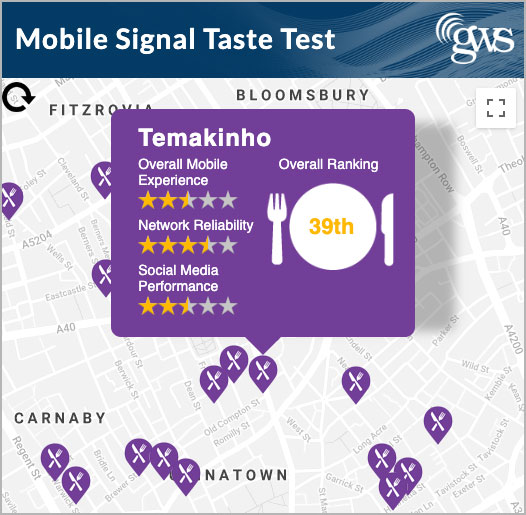 Methodology and notes to editors

GWS’ nationwide poll of 2,000 mobile-phone wielding UK adults was conducted by OnePoll. Fieldwork took place from 7th to 15th May 2019. OnePoll are members of ESOMAR and employ members of the MRS.

GWS also tested inside and outside of 50 restaurants in London during March 2019 using Samsung Galaxy devices (powered by Rohde & Schwarz’s SwissQual QualiPoc Freerider) to gather data for its study of wireless connectivity performance. GWS selected restaurants as Instagrammable based on popular London restaurants that are often featured in ‘most Instagrammable’ ‘Insta-worthy’ and ‘must-dine’ lists in sources including Evening Standard, Time Out and Squaremeal. Key dining and patron traffic areas were tested inside each restaurant including measurements of both mobile network and WiFi performance. Just over 47,000 voice and data samples were collected.

Global Wireless Solutions, Inc. defines the industry standard for network benchmarking, analysis and testing. Working with some of the world’s largest wireless network providers, GWS offers standardised, high-quality network data and engineering analysis through a suite of benchmarking products, services, and OneMeasure diagnostic apps that includes drive, venue, and in-building testing. Founded in 1996, GWS is headquartered in the Washington, D.C. metropolitan area. At last count, GWS has driven more than 12 million data collection miles for its customers. For more information, visit www.gwsolutions.com and follow us on Twitter at @gwsolutionsinc.

Double standards: Study reveals nearly three quarters of people use their phones at the dinner table, but are irritated by others doing the same

LONDON, 17 October 2019: Analysis into British attitudes towards dining etiquette has revealed double standards
This website uses cookies to improve your experience and our site's performance and functionality. Learn more.
ACCEPT