First it was gyms, now it’s restaurants. The latest news on London mobile coverage is that if you want to social media your dinner, you are probably out of luck.

The company which likes to roam the world with a backpack full of Samsungs is GWS. It’s a tough life, but GWS’ team of engineers spent a month going to some of the smartest restaurants in London evaluating mobile network signals.

They visited  50 popular and Instagrammable dining establishments, The research collected of just over 47,000 voice and data samples and found “not-spots,” particularly in tourist hotspots. Results were ranked using GWS’ OneScore evaluation process, a measurement of overall performance that takes into account voice, data, video, coverage, and reliability metrics based on customer experience.

The findings on eateries’ coverage leave a bad taste, with over a fifth of people saying that they have been “forced to leave the table” because they thought getting a signal more important than staying with the person they were dining with.

This one is hard to call. On one side, when all the mobile networks are insistent that coverage in the U.K. is great there really shouldn’t be an issue with making a call in a London restaurant, and on the other, is it a good thing to encourage?

People clearly want it. Like the gym research, GWS looked at the human side of coverage as well as the radio propagation.  GWS used its OneScore technology and found more than a tenth of the people they surveyed said their meal had been “ruined” by poor Wi-Fi.  Most people say they cannot rely on restaurants’ Wi-Fi coverage with just 18% expecting all restaurants to offer free WiFi as standard. Using mobiles O2 and Vodafone work best inside the restaurants GWS tested.

There is, of course, the food snap to Instagram which is the amuse bouche to any meal. Over a quarter (26%) internet browse the internet at the dinner table and 23% cite Instagram and Facebook, as part of their dining habits, yet the same percentage (26%) have been frustrated by slow connections. The shock news is many diners are unable to use their phone at all with over a fifth (23%) saying that they have been forced to go outside the restaurant because of a lack of reliable signal. Worse, more than one in ten (11%) said that their experience in a restaurant had been ruined due to poor mobile connectivity.

The places where GWS OneScore rankings show coverage is great include Chojo, Berners Tavern, Bourne & Hollingsworth Buildings, Knife Restaurant and Riding House Café, whereas many restaurants in Soho and the W1 area fall short, landing more towards the bottom end of the table. Sometimes this is due to the restaurant being subterranean, such as Brasserie Zedel, which led to many failed calls and data tasks across all of the U.K. networks. 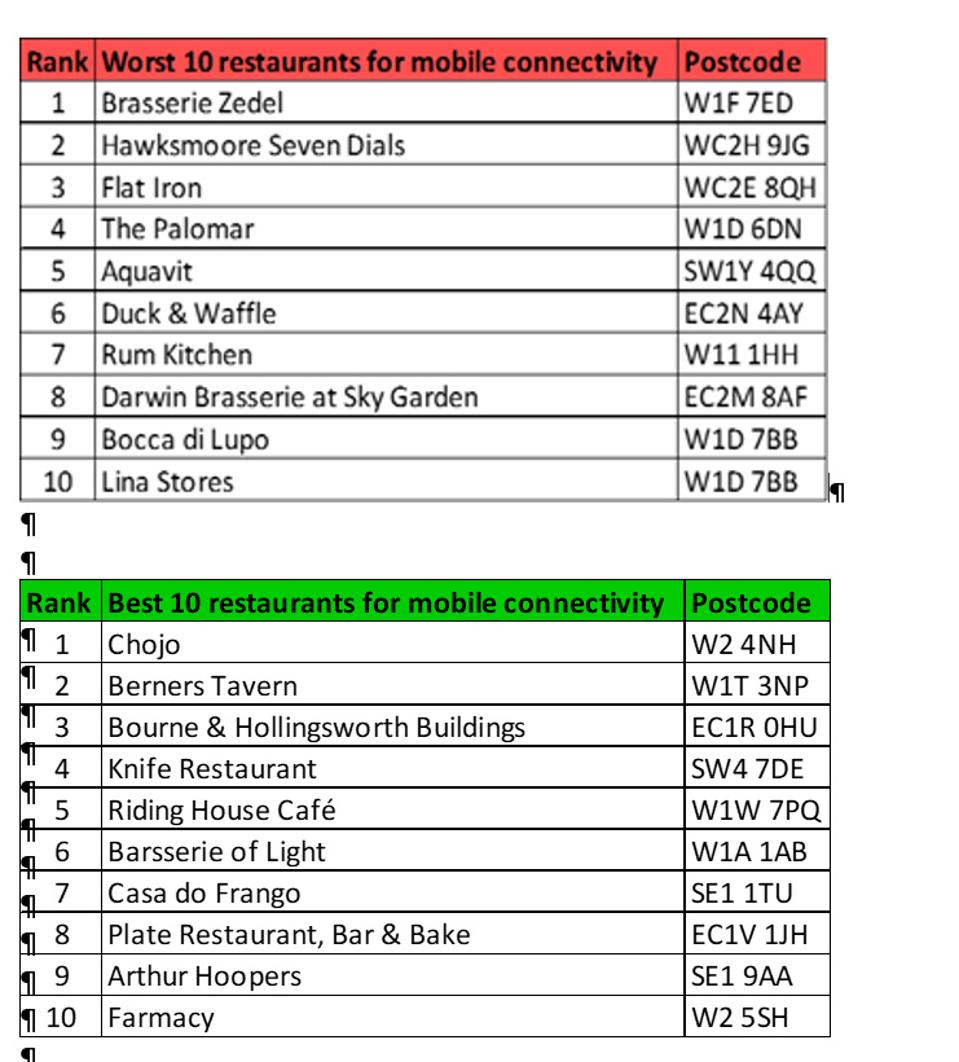 Height can be a problem too with the Duck and Waffle on the 40th floor of Heron Tower, and Darwin Brasserie at the Sky Garden located on the 36th floor failing to be high quality in mobile service.

Which is ironic, as Vodafone chose the Sky Garden for its 5G launch. Unsurprisingly, network operators are challenged in providing wireless service high above the typical rooftop levels and below ground.

Double standards: Study reveals nearly three quarters of people use their phones at the dinner table, but are irritated by others doing the same

LONDON, 17 October 2019: Analysis into British attitudes towards dining etiquette has revealed double standards
This website uses cookies to improve your experience and our site's performance and functionality. Learn more.
ACCEPT