Dulles, VA – 7 November 2022 – With just under a week to go until Election Day, and polls showing a majority of voters believe this election is “more important” to them than past midterms, new data reveals that Americans’ use of mobile devices to consume right leaning news has skyrocketed up 86%, far exceeding its high point during the previous election cycle.

In stark contrast, consumption of left leaning media has declined by 23% during that time and has lagged behind right leaning outlets since November 2021, despite being consistently more popular for the previous two years, and in the last election.

The research was conducted by mobile insights consulting firm Global Wireless Solutions and is based on mobile usage trends of 200,000 adult smartphone users with 54 million data points analyzed daily. The study found that this increase was part of a wider rise in the consumption of media since the 2020 election. At its peak during this midterm election cycle total mobile news consumption is up 18% compared to its high point in January 2021 with Americans now spending 93 minutes a week reading the news on mobile devices. 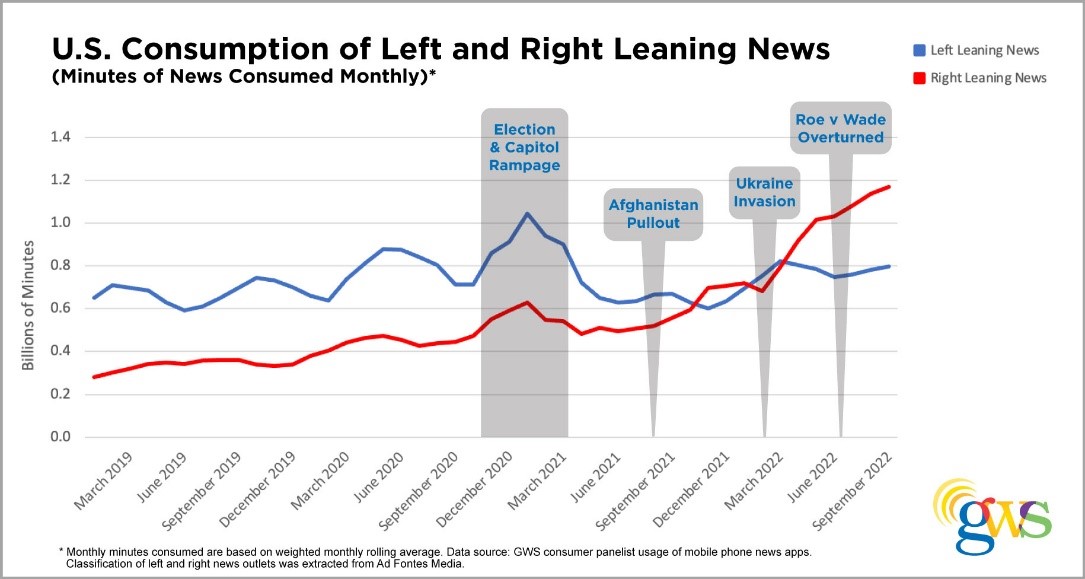 What’s more, the data showed that it was men who were driving this growth of right leaning outlets, with a dramatic 110% increase in minutes of media consumption compared to January 2021. At least some of this increase has been at the expense of left leaning media, which has seen consumption by male users decline 10% since its peak after the 2020 election. These changes were also reflected in key battleground states, where men are consuming 139% more right leaning media in 2022, whereas left leaning media has stayed flat.

Paul Carter, CEO, Global Wireless Solutions, commented: “Our data paints a clear picture: overall media consumption is on the rise and has been for a while; in September of this year it was nearly twice as much as in September of 2019. Mobile technology now makes it possible to have live media at your fingertips from almost anywhere in the country, and this is empowering Americans to consume their chosen outlets at any time of the day. Whether it’s the rise in 5G, which GWS data shows more than half the country have access to, or increasingly sophisticated devices, mobile technology has become the bedrock of our growing appetite for media. This uptick in news consumption represents important behavioral data that we’ve collected through our panel – helping to identify trends and make predictions; more specifically, what’s important to Americans now and what’s on their horizon.”

Data presented in this release is collected from GWS’s OMCP between January 2019 and September 2022. The OMCP is an opt-in consumer panel that measures mobile app usage and content, mobile network performance, and consumer perceptions. The OMCP collects consumer data anonymously from Android smartphones 24 hours a day, seven days a week, whenever and wherever consumers use their devices. Panelists also have the option to participate in surveys fielded directly to their Android smartphone. OMCP panelists (aged 18+) are recruited from the top 41 metropolitan areas across the US along with consumers located in less populated areas (overall covering 98% of the U.S. population). Approximately 54 million data points are generated daily by panelists. Data is anonymously collected and reported in aggregate for market research purposes only. All information collected is weighted to a user’s demographic representation of the U.S. population (aged 18+).

Classification of left-leaning media outlets vs. right was primarily extracted from Ad Fontes Media. In addition to using this source, GWS focused on larger media outlets in terms of media presence, popularity, and the amount of news consumed among panelists. Data on average minutes of news consumption is based on insights from users who access mobile news via dedicated news apps on their smartphone.

For most consumers today, their mobile device is their life’s remote control. As an independent mobile insights consulting firm, GWS measures every aspect of how people live, work and play via their mobile devices – as well as how mobile network performance affects them.

Combining our market-leading network benchmarking technology and methodology with deep behavioral data, we help businesses and organizations to drive innovation and deliver better customer experiences through mobile insights, anywhere in the world. Championing the needs of mobile users by understanding and testing the things that matter to them, we’ve evolved our technology and services in step with the needs of industry and consumers for over 25 years.